Window realism the key for Moyes 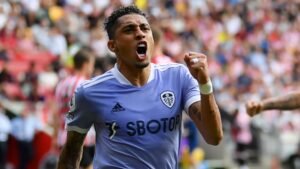 It’s always good to go for the best but realism is also an important element in the transfer market.

Yes, we want to see players who can make a serious difference arriving at West Ham and there is no question that several of the names we have seen linked with the club recently would have done that.

Raphina, Phillips, Nunez and now Ward-Prowse are among those being named as among those players David Moyes would love to bring into the West Ham squad.

That’s admirable in itself but so far the closest we have come to signing  anyone this summer is the hopeful arrival of Nayef Aguerd which could be completed today or over the weekend.

That of course would give us five central defenders as things stand and we await names emerging for the left back and striker positions hopefully.

We are left to hope that the manager will be looking at quality obtainable targets rather than perhaps spending too much time on the star names he may have only a small chance of landing.

The window clock is ticking.

← Moyes will need to find £70 million for midfielder
Report: Hammers in for striker →
Click Here for Comments >

3 comments on “Window realism the key for Moyes”