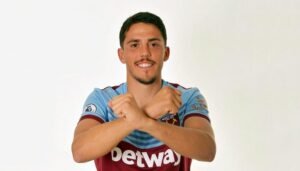 David Moyes created a shock for Wolves when launching Pablo Fornals into wing back action at the weekend.

That was a tribute to the Spanish international who is a hugely versatile operator so there  are no guarantees it will happen on a regular basis.

The manager explained he had hatched the plan whilst watching the Black Country outfit lose against Arsenal.

He told reporters: “It was a game I felt we needed to slightly alter because of how we were playing and how they were playing.

I watched them against Arsenal and felt that we had to try it. We have done it before against Wolves but we lost.

However, we felt for this game it was needed. I thought he played really well in that role and did a good job for us there.

Pablo is really flexible and he can play in so many different positions and while we are without Arthur [Masuaku] and have a few injuries it has left us a little bit short, without an out and out wing-back.
So it is something where I am glad he came in and did a good job for us.”
Permalink

← The year of the underdog!
Seven years on this Iron has a big dream →
Click Here for Comments >