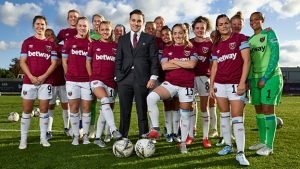 Women’s football including the Women’s Super League (WSL) may not survive the global health situation Claret and Hugh have been told.

The FA are on the verge of abandoning the WSL season – the  truth of the matter being  the league makes no money.

There doesn’t seem a will to continue we have been told by one insider close to the women’s game.

The Women’s Super League is largely funded by the richer men’s teams but this funding could soon dry up as a financial crisis engulfs football in general around the globe.

West Ham invests in excess of £1.5m per year to fund their women’s team run by owner’s son Jack Sullivan but whether they can continue to do that next season remains to be seen.

Women’s professional football in the UK is not financially sustainable and without generous funding from parent men clubs, funded by TV and match day revenue, they will simply cease to exist.