West Ham were forced to play the final 25 minutes of their 2-0 defeat to Arsenal with 10 men after one of the worst refereeing decisions seen in the Premier League this season.

The Gunners were one up at the time, with Gabriel Martinelli having scored a quite excellent goal to give the home side the lead at the Emirates. 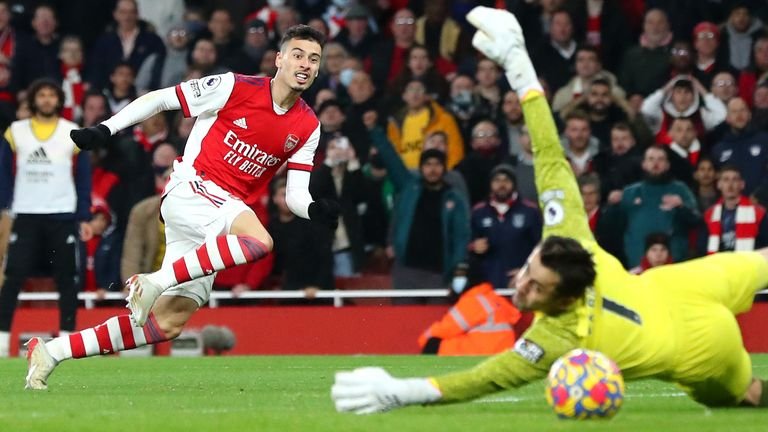 Cutting in from left flank, the attacker received the ball from Alexandre Lacazette and proceeded to bend a finish into the bottom corner and beyond the despairing reach of Lukasz Fabianski.

In the 66th minute, though, there was a genuine refereeing calamity.

Vlad Coufal slid in to win the ball from Lacazette in the box, with replays showing that he did, indeed, do just that with a clean challenge, although the Frenchman rolled repeatedly on the ground, feigning injury.

Anthony Taylor, the referee, inexplicably pointed to the penalty spot and showed Coufal a second yellow card. VAR, for some reason, stuck with the on-pitch decision, which may have many of us wondering what on earth the point of it is.

Fabianski actually saved Lacazette’s penalty but the Hammers struggled to sustain pressure with 10 men, despite some admirable attempts, and Emile Smith Rowe came off the bench to kill the game in the 86th minute.

Said Benrahma meekly surrendered possession in the Gunners half and they broke, with Bukayo Saka finding Smith Rowe, who sent a shot through the legs of Issa Diop and into the bottom corner.

It cannot be stated just how much of an effect the referee’s decision to brandish that red card had on the game, and we are still genuinely astonished that Coufal was sent off.

Still, special mention should go to Craig Dawson, who was magnificent in central defence, and the ongoing efforts of Fabianski, who made a number of excellent saves, including that stop from Lacazette’s penalty.