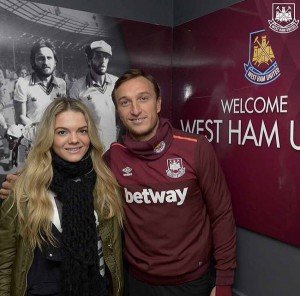 Mark Noble has announced that West Ham fan Louisa Johnson has agreed to sing at his testimonial on the 28th March.

Posting on his official twitter account last week, Mark tweeted “Buzzing to announce that the 2015 X factor winner and whufc fan, Louisa Johnson will sing at my testimonial”

Trevor Sinclair tweeted former Hammer Paolo Di Canio, pleading with him to confirm his attendance for the testimonial. Trev wrote “Paolo I need you to join me & play at Upton Park and for the West Ham fans one last time for Mark Noble testimonial #MN16“. The message was re-tweeted by Mark Noble himself.