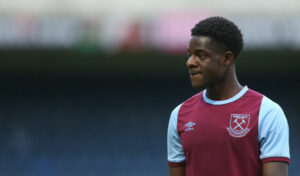 Ademipo ‘Mipo’ Odubeko has been nominated as  Premier League 2 Player of the Month in  April.

The 18-year-old has scored five times in four appearances as the U 23s have staged a fight from relegation which at one stage looked an inevitability.

He grabbed a hat-trick against former club Manchester United to turn a 2-0 deficit into a 3-2 victory before scoring a brace in a 2-1 victory over Everton.

His heroics have ensured the under 23s avoided relegation – again scoring in the last two games of the season this month.

Odubeko said of his nomination: “This is my first time being nominated for this award in my first season of U23s football, so I’m very happy.

“My aim was to help the team pick up as many points as we could, so without my teammates, it wouldn’t have been possible.

“The match against Manchester United was probably my favourite game this season as I haven’t played a lot due to injury, but it was a great game and great to score a hat-trick in.”

The shortlist was decided by the Premier League Football Development Panel after Premier 2 club coaches nominated the best performance by an opposing player in each of their league matches in the month. The Panel will also select the winner.

One comment on “Young Irons striker up for big award”