Youngster could leave for PL rival

The Athletic reports that Leeds are interested in a deal to sign the academy prospect from the Hammers in this transfer window. 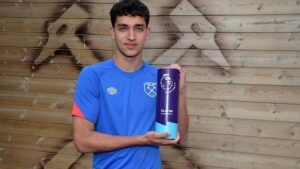 They claim that the midfielder has become a target for the club  as they look to swell their youth ranks.

Perkins is a regular for West Ham’s academy sides and was actually named the club’s Premier League 2 Player of the Monty in April of this season.

Perkins was also on the bench for the Europa League clashes with Lyon this season and has threatened to make a breakthrough into the first team.

It remains to be seen if the Hammers would be willing to allow a player of Perkins’ talent to join another Premier League club in this transfer window.

Perkins has three senior appearances under his belt for the Hammers and we’d have to assume that West Ham would fight tooth and nail to keep him.

5 comments on “Youngster could leave for PL rival”