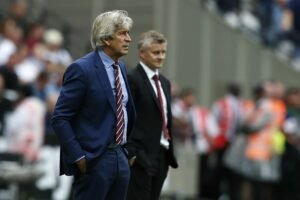 Ironically Manchester United sang back the un-original ‘You’re not West Ham anymore’ used by many away fans since our move away from the Boleyn Ground.

Today was probably the worst Man United team I have ever seen the Hammers play and I could easily understand why they haven’t won away since March and the trouble they are now in. They lacked any confidence and squandered chance after chance with superb help from our own Fabianksi to deny them any chance of a goal.

The away fans were right, we aren’t the West Ham of old. Despite missing Manual Lanzini and Arthur Masuaku we were able to bring quality off the bench in the gusie of Aaron Cresswell and Pablo Fornals without sacrificing too much quality.

We were also able to bring on the likes of Jack Wilshere, Pablo Zabaleta and Robert Snodgrass late in the game rather than rely on one good position for each position.

I would rather be the new West Ham in the London Stadium than the hapless Manchester United this season.

Just goes to show that money doesn’t buy you everything!

5 comments on “You’re not famous anymore”