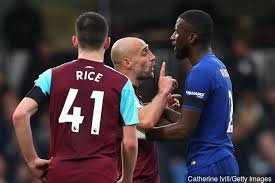 Pablo Zabaleta has become the first Irons player to say what every fan is thinking: Declan Rice will become a future West Ham skipper.

‘Decs’ has been the emerging star of the show over recent games drawing rave reviews from David Moyes, fans, players and his international manager Martin O’Neill.

Now Zaba has paid him the ultimate accolade saying: “Decs has been fantastic. It’s fantastic to see him play at that level and he’s only 19.”

Speaking to West Ham Tv he added: “I can’t believe that he is that young yet he is very mature and he is improving game after game. I love when I see young players from the Academy come through and playing that well.

“I like to have him next to me because he is young and he has that energy to play and do some of the running. I hope I can help him and teach him how to defend.

“Listen this guy has a great future for this Club. He will be a future captain for West Ham, I am sure about this. I am very pleased for him.”

Rice, who has totalled 25 first-team appearances this season, previously captained West Ham’s U23s to promotion to Premier League 2 Division 1 a year ago.