Zarate was played out of position at West Ham 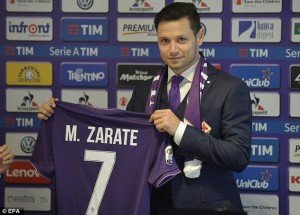 Former Hammer Mauro Zarate has said he enjoyed English football but he never felt comfortable at West Ham with his role under two different Hammers managers.

“I am happy to be back in Italy with a great team, and to show how I can play,” Zarate said.

“It is a good chance for me to get back on track. In England, it was good because English football is enjoyable, but I wasn’t too comfortable with my role at the club.”

“That is why I decided to come here. I prefer to play in a free, attacking role, one that allows me to roam.”

“I have already spoken with Sousa and he has assured me I will have that here.”

Zarate made his debut for Fiorentina on Sunday with a brief substitute appearance. The28 year old Argentian joined theSerie A outfit permanently for  £1.6m last week. Zarate joined West Ham from Velez Sarsfield in summer 2014  on a free transfer and scored five goals in 22 appearances this season before leaving.