Kurt Zouma insists that West Ham are good enough to qualify for Europe in every single season.

The Hammers are preparing for this weekend’s clash with Premier League leaders Chelsea, who beat Watford in midweek, and will be aiming to return to winning ways. 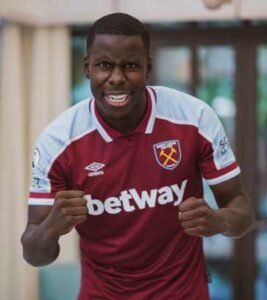 Of course, the Hammers have lost to both Wolves and Manchester City in succession, before being held to a draw by Brighton in midweek.

Even still, the Irons are still fourth in the Premier League table and will be aiming to beat the Blues to maintain the European push this season.

David Moyes’ men have had a taste of Europa League football this term and have already qualified for the knockout stages, winning the group.

And Zouma believes that there is more than enough quality in the Hammers squad to continue challenging for Europe in plenty of seasons to come.

Speaking to the club’s official website, the ex-Chelsea star said: “I mean, when you see the season we’re having at the minute, I don’t want to go ahead too much, but we can beat the top four and top six teams and that’s where we are at the minute – we can compete with everybody.

“That’s what we want, to be a competitive team and playing in Europe every season. Obviously, it starts from Saturday. It’s going to be a tough game, but we feel confident we can get points from that.”