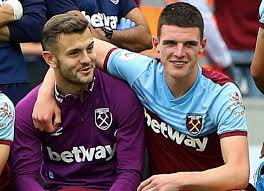 Jack Wilshere has shrugged off his woes to pay a huge compliment to Declan Rice.

The former Gunners midfielder’s career has stalled in a big way since he arrived at the London Stadium but he clearly feels himself privileged to be part of a squad in which Declan is involved.

His comments follow those of Paul Merson who want Arsenal to move for the 21 year old defensive midfielder although the north Londoners are unlikely to have the funds to make a serious offer.

The Hammers have made it clear regularly that they have no interest in selling Rice and even the current cash problems would make little difference to their position.

Felipe Anderson and Manu Lanzini would probably both be available should the club need to plug holes in their finances although Manchester United could follow up with a Rice inquiry.

Wilshere meanwhile can’t get over the 21 year old’s ability saying on his Instagram: ” I get to play with him, Dec. Declan Rice. He can go all the way, he’s unbelievable. Left foot, right foot and he’s a great lad. Love you, Dec!”