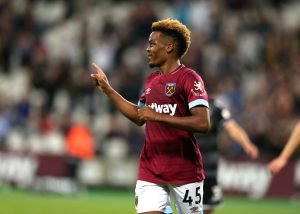 Hammer Grady Diangana fired the Baggies ahead after 11 minutes against Derby County tonight.

It is his second goal in two games as West Bromwich Albion moved top of the Championship as Slaven Bilic’s men look to regain their Premier League status. Derby found themselves a goal behind after just 11 minutes when Grady Diangana scored from an acute angle.

Grady has scored seven goals from 27 appearances for West Brom this season in the Championship while on a season-long loan.

They are many who hope Grady will not go out on loan next season and instead fight for a first-team place as a Hammer.

The West Ham loanee puts West Brom ahead against Derby – but was it offside?