Irons can surive on financial hit by another looms 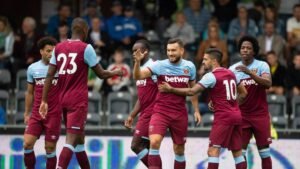 The football world – like every other industry – is in chaos, and along with concerns about whether and how the domestic 2019-20 season will be completed plus significant financial problems by every club in the country.

Hammers vice-chair Karren Brady caused a stir when she appeared to suggest that the season might not be finished but has since adjusted her position and joined the determination to finish the season – maybe behind closed perhaps in July.

But the reality is the goalposts have moved so many times from original hopes of an April 30 resumption and no signs allegedly of the situation peaking in the UK, it remains impossible for the club or the Premier League to make firm plans.

That has left the Hammers, like clubs up and down the land, to wrestle with the financial difficulties arising from the shutdown. In some ways, the club are better placed than most. They have a number of lucrative promotional deals. Among their sponsors are the renowned UK betting firm Betway along with Lyca Mobile and Monster Energy, providing some financial firepower.

The main problem for the Hammers, as with most clubs, is the wage bill. The West Ham payroll is around £2.6 million every week, or £10.4 million per month. That’s a hefty amount of money to pay out to players at a time when gate receipts have dried up, but fulfilling their commitment to the players and to the non-playing staff is a priority for the club.

The good news is that the West Ham players have stepped up to play their part. Following the example of the Southampton squad, all of whom agreed to a 10% wage cut for the next three months, West Ham’s players have agreed a similar arrangement.

According to reports, the squad have agreed to a wage deferment, though it is not clear whether it is the full 30% suggested by the Premier League, a figure that has been challenged by the PFA.

It is clear, however, that the club hierarchy would be setting an example. Boss David Moyes, along with Brady and the club’s Chief Financial Officer, Andy Mollett, will all be taking a 30% cut for the duration of the lockdown.

And those measures have been boosted by the news that the club’s joint-chairmen, David Sullivan and David Gold, along with their fellow shareholders, are set to give the club an injection of £30 million to help get through the crisis.

But there’s another and entirely unpalatable financial threat and it’s not the absence of Premier League action and the potential cancellation of the season. The real danger is relegation.

The consequences of relegation could be disastrous. Accounts for the financial year that ended in May 2019 showed that the club made an eye-watering £28 million loss, with Sullivan and Gold already having loaned a combined sum of £45 million.

There has also been big spending on infrastructure since the Hammers moved to the Olympic Stadium, and in the last four years, a net spend of £214 million on players, which has yet to show significant results, has not helped their financial situation.

Financially, the Hammers seem to be in a strong position to come through but they may yet face a momentous relegation battle, the financial stakes of which will be much higher.