Billy Bonds Stand to be opened on Saturday 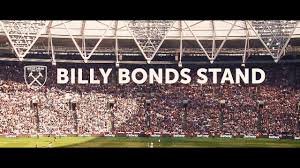 West Ham will soon announce details of the opening ceremony for the London Stadium East Stand to be renamed the Billy Bonds stand on Saturday before kick-off against Newcastle United.

Details of the actual ceremony are scarce at the moment but Bonzo and his family will be guest of honour with a number of former players who played alongside him also invited to take part.

Coloured bags will be laid out on seats of the East Stand to create a human mosaic to spell out Billy Bonds.

The ceremony is thought to start around 5.15pm with supporters asked to be in their seats for 5 pm.

Bonds on the announcement of the stand early in February told WHUFC.com “To think that I am only the third West Ham player to receive this honour after Bobby Moore and Trevor Brooking – you can’t get better than that,”

Bonds enjoyed a remarkable 21-year playing career with the club between 1967-1988 making 799 appearances.

He then went on to manage the club between 1990-1994, twice winning promotion to the top division.