Carlos Tevez tells players to do the right thing 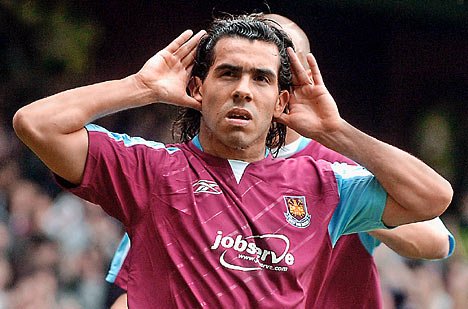 Carlos Tevez believes top-flight footballers should offer to cut their wages during the current health crisis..

Argentina’s Superliga was one of the last domestic competitions to announce a suspension on March 17 and Tevez, who now plays for Boca Juniors, is on hiatus after the government announced a nationwide lockdown.

Barcelona‘s squad including Lionel Messi and Luis Suarez have all taken a 70 per cent wage cut to ensure the club can continue to operate during the lockdown in Spain, while players such as Cristiano Ronaldo, Kylian Mbappe and Robert Lewandowski have all made donations to support organisations battling the spread of COVID-19.

And Tevez said more players should be helping out.

‘We have to be there, to help out,’ he told America TV. ‘Of course I would gladly go and help in a soup kitchen, to do whatever.

‘A great example would be for all of us, footballers, actors, to go out there and help in the poor neighbourhoods which is where help is needed. I’m available to do that.

He said: ‘Any footballer can live six months or a year without getting paid. We are not a good example, we might be for other things but not for this.

‘We don’t have the despair that others live with day after day, those that have to leave their homes at 6 a.m. and return at 7 in the afternoon in order to feed their families the next day.

‘For us, it’s easy to talk from home, knowing that I have food for my children. But for those desperate people, that can’t move, that if they leave their homes they will get arrested and can’t feed their children, it’s very worrying.’

Tevez also insisted clubs must do everything to support their communities.

‘The clubs have to get involved. Instead of going to train in the morning, they [should] demand that you do things for the people,’ he added.

‘For example, go to the dining rooms in La Boca. I would be delighted to go. I know that my family is fine.

ClaretandHugh says: Good to hear from the former Hammers hero who makes total sense and in doing so shows that Professional Footballers’ Association Gordon Taylor needs to ensure that he doesn’t inflict a public relations disaster on the game by insisting the players don’t do any such thing. We aren’t suggesting that will be the outcome of talks between the PFA and the Premier League but the early noises coming from him were unpleasant and unnecessary when refusing to offer too much hope. Everything Tevez says is spot on and we know that a large majority, probably, of the current players will be ready to make sacrifices as is the case with the rest of the world’s population. At some point this is going to end and football in the meantime needs to ensure that it comes out with its image as clean as possible. The game hasn’t made a great start but more haggling on this particular point needs to stop.