David Moyes could be forced to sell to buy

Posted by Sean Whetstone on June 3, 2020 in News, Whispers 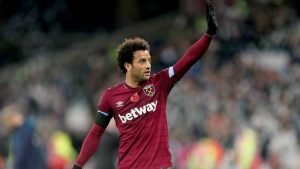 A number of players could be available given the right offers  to help fund David Moyes’ summer transfer kitty as he attempts to snap up young hungry players to reshape his West Ham squad.

While players like Declan Rice will be off-limits this summer a number of other players will be allowed to leave if club valuations are met.

Those who would be allowed to depart for the right price are thought to include Felipe Anderson, Fabian Balbuena, Ablian Ajeti, Manuel Lanzini, Arthur Masuaku, Jack Wilshere, Ryan Fredericks and Andriy Yarmolenko but literally no-one is safe if the right money is offered.

West Ham first needs to know which division they will be playing in next season before a transfer strategy and target list can be drawn up. With a football financial crisis due to the global pandemic, transfer funds will be tight and it is likely to a case of sell to buy in a depressed transfer market.