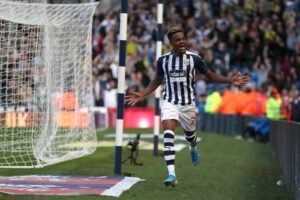 West Brom boss and former Hammer Slaven Bilic is hoping and praying his Championship promotion hopes aren’t thrown into disarray this January by having to send star man Grady Diangana back to the club back to us.

And such has been his form since arriving at the club that other outfits will be taking a very keen interest in the 21 year old.

The Irons midfielder has scored four times and been responsible for three assists as the Baggies have hit the top of the Championship on the same 22 points as fellow midlanders, Nottingham Forest.

Grady has become a firm favourite on the terraces but Slav was forced to agree to a clause being inserted into the loan contract which allows Manuel Pellegrini to recall the player should he be required come the January window.

At the moment it’s a move which is working out for both sides with – from a Hammers point of view – the academy product gaining tremendous first team experience at a very decent level.

And a Baggies source known well to CandH  close to the Baggies told us on the phone: “There is a fear the Irons will want him back – everybody here feels the same. He’s been tremendous and if h were available to buy that would be fantastic.”