Husillos sacking could cause major rift 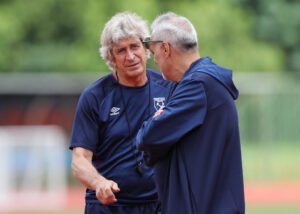 The widely reported Guardian report claiming that Mario Husillos could be set to become the Hammers fall guy after what is being seen as some dramatic transfer market failures this summer asks one big question.

Whilst claiming that the manager is entirely safe from the sack the piece adds @ https://www.theguardian.com/football/2019/nov/06/west-ham-director-of-football-mario-husillos-future-doubt-manuel-pellegrini: “questions are being asked about Husillos’s role.”

And it continues: There is unhappiness with the Argentinian’s work in the transfer market last summer and he faces a fight to retain ultimate responsibility for identifying signings in January. After that, the club may look to review Husillos’s position.”

It details the signings of Roberto and Pablo Fornals as being big problems and whilst not coming to a FIRM conclusion implies heavily that the Director of Football could pay the ultimate price should his failures not come good.

It echoes our own story @https://www.claretandhugh.info/board-worry-over-signings/and adds:  They have faith in Pellegrini, whose £8m-a-year contract runs out in the summer of 2021. At the same time, there are concerns over the former Manchester City manager’s tactics and team selections.

ClaretandHugh says: Pelle and Husillos go back many years and it was always paramount for the manager that Husillos was included as director of football at the club before agreeing to become the new manager. He has always said it was important he had total control and that presumably was part of it. Thus the idea of firing him could lead the Hammers into a confrontation with the boss as he heads towards the second half of his second season at the club. Quite what Pellegrini’s reaction would be should it happen is probably not too hard to read although some may believe it would cause a major rift. However, whether a manager should be allowed to appoint his own DoF is another question. It should be stressed of course that there is no statement from the club to endorse any of this  and we are now very much in a wait and see a situation which can only be eased to some extent by a win at Turf Moor at the weekend.

4 comments on “Husillos sacking could cause major rift”