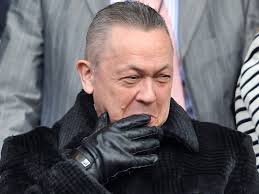 Speaking exclusively to ClaretandHugh he declared: “Another top club came in on Monday for the player, but I don’t think its right that we name the club.”

The club believed they had the player under lock and key until then and were left clinging onto their hopes whilst the European outfit negotiated with Kayoute’s club Anderlecht.

But eventually the player’s strength of character overcame the obstacles and Sullivan revealed: “The main reason this deal was done was the player wanted to play for us and held firm.

“It was a very tough deal to complete. The price just kept going up. It’s been going on for three weeks.”

Sullivan revealed that the player had first come to the club’s attention whilst manager Sam Allardyce had gone to watch a striker at an Anderlecht match.

He said: “He went to watch a striker but this player caught his attention. We then did a lot of research and we believe he has a good chance of being a top player.

“Now We expect to sign the or four more but it’s all about who is value for money.