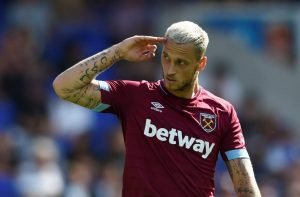 Top-scorer Marko Arnautovic is all set to make his presence felt against Spurs at the London Stadium on Saturday afternoon.

The top man returned to Rush Green on Monday after an agreement was struck between the club and Austria that he would only be involved in the match against Northern Ireland given an ongoing knee issue.

The player has often commented that he is playing through a pain barrier adding that this is the advice he has received from the medical team who are constantly balancing the issues involved.

Tonight (Tues) ClaretandHugh was told that the front man was certain to be involved in a game that will see the Irons attempting to bounce back immediately from the 1-0 defeat away to Brighton.

Beyond that the squad is in good shape and although neither Carroll, or Reid are available the manager has a fully fit squad to call upon for the game.