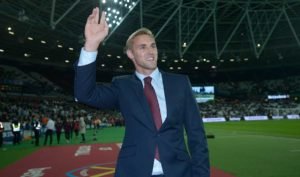 Jack Collison has stepped down from his role as an Academy coach at West Ham to move to the USA to join MLS side Atlanta United working under former Crystal Palace and Inter Milan boss Frank de Boer.

The 30-year-old former midfielder, who progressed through the youth ranks and made 121 first team appearances between 2008 and 2014, before returning two years ago to coach the Under-16s, is departing to take up an opportunity in America that will give his young family the chance to experience a new lifestyle and culture.

His role will be filled by Kevin Keen. He told WHUFC.com “It’s certainly mixed emotions, I think everyone is aware of how closely I hold West Ham to my heart. I’ve often spoken about being a part of that special West Ham family, and I’ve felt it even more since coming back as a coach in the last two years.

“I’ve been able to interact with the fans more than I was ever able to as a player – from doing the ambassadorial work, meeting people in the Club London lounges on a matchday, getting to know the families of the boys in the Academy, and really getting a feel for what the club means to so many people.

“For me to step away from an incredible role and a big job, it had to be something special and unique. An opportunity has come up overseas that will give me the chance to discover a completely different culture, and a chance to give my family a new and exciting life experience at the same time.

4 comments on “Collison to depart West Ham for USA”