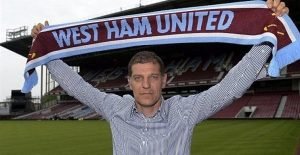 Former West Ham player and manager Slaven Bilic has been linked to the Celtic manager job.

The 50-year-old has been out of work since leaving Saudi Arabian club Al-Ittihad in February but in April let it known he would be willing to speak to the Scottish FA if they approach him about the Scottish national manager role.

A report by the BBC claims Bilic is open to managing Celtic and would prefer a club management role more than managing the Scottish national team.

Neil Lennon is currently managing Celtic and has clinched the Scottish league title but his long-term future is unclear.

Bilic spent two-and-a-half years at West Ham before being axed by the Hammers board in November 2017, and eventually took charge of Saudi club Al-Ittihad last year before leaving them in February. The Croat enjoyed a great first season in charge of West Ham, guiding them to a seventh-place finish in the Premier League in 2015/16 and a Europa League spot.

One comment on “Former Hammer linked with Celtic job”