Former Hammer off to Palermo 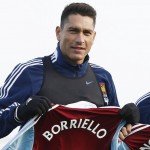 Former Hammers striker Marco Borriello is close to a move to Palermo according to Palmero24.net.

The Italian who was loan to the Hammers from Roma  last season failed to score in his two appearances before becoming injured and returned back to Roma at the end of the season. Roma are so desperate to off load him off their wage bill it is claimed they are ready to pay over half of his £2.62m annual salary for him to join Palermero.