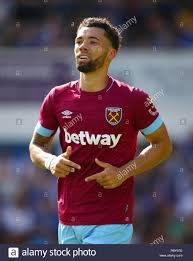 Ryan Fredericks is Wednesday’s Claret and Hugh man of the match with an impressive average score of 8.32, he was only player to score an eight this week in the match against Manchester City at the Etihad.

With hundreds of readers voting in the Claret and Hugh player ratings  Issa Diop came second with a score of 7.96, Fabianski was third with an average score of 7.82, following a theme in defence Angelo Ogbonna received a rating of 7.56.

Declan Rice had another solid performance being rated at 7.25 while debutante Ben Johnson received his first average score of 7.1 as the only other player to score within the seven range.

Top of the sixes was Michail Antonio on 6.53 followed by Manuel Lanzini who came on at half time and received an average score of 6.48 for his efforts. Pedro Obiang was the last of those to score in the six range with an average of 6.29.

Readers were less impressed with performances from Andy Carroll 5.96 Grady Diangana 5.77 Pablo Zabaleta 5.61, Samir Nasri 5.43 and the lowest average score was reserved for Felipe Anderson with an average score of 5.33.

← Poll: Do Hammers have a ready made right back?
Hammers return to the top of the table →
Click Here for Comments >