Posted by Sean Whetstone on September 1, 2019 in News, Whispers 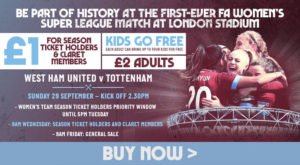 London Stadium owners E20 have agreed to host the West Ham women’s game against Spurs women as part of the Hammers twenty-five competitive match quota with their concessionaire agreement at no extra cost.

West Ham Women could have paid hundreds of thousands of pounds to host a match at the London stadium but a deal has been struck with the public sectors owners to make it part of the existing quota of included games.

A senior club insider exclusively speaking to Claret and Hugh via Email said “They have accepted, in the spirit of goodwill, that it is a fully professional competitive game and that there is equality between men and woman. That is why we have tried to price the game as a benefit to the community and not West Ham. We hope the match attracts new supporters to West Ham and women’s football in general”