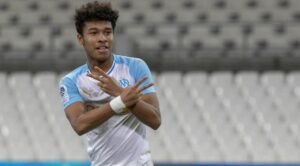 According to The Daily Express, West Ham are interested in signing Marseille centre back Boubacar Kamara but Manchester City may yet swoop in for him.

It’s claimed that West Ham have been scouting Kamara this season, and would be interested in signing him having impressed for Marseille. However, Pep Guardiola at Manchester City are also keen, and may launch a £28million bid to gazump the Hammers and bring Kamara to the Etihad Stadium.

As we have said a number of times this week the owners are injecting £30m of cash and players are deferring wages just to pay April payroll.

The notion that the club has a spare kitty of £28m to compete against Manchester City in the transfer market is pure fantasy at this stage.

A report by French website Le10Sport suggests David Moyes wants to build a new-look West Ham team around young, hungry players. It claims the Scotsman is set to use the French leagues and the Championship as his markets in the next transfer window.