Hammers show their ‘clinical’ side 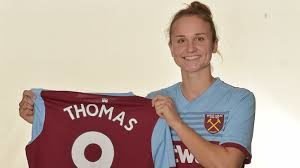 Martha Thomas was delighted the West Ham United Women showed their clinical abilities when seeing off Brighton  3-1 at the weekend.

She grabbed the opener – and her second of the season –  before Kenza Dali and Alisha Lehmann secured the result after the break.

It was the first time this campaign that Irons had scored more than once in a match, finally showing a ruthless edge to their game.

“It was important to get the goal early in the first half,” Thomas said. “Obviously, we missed some chances in our last game against Tottenham, so to get some goals in this game is something we’re really pleased with.

“We were clinical at the right times and we killed the game off.”

Talking to the official site she added: “We had success out wide and we recognised that as the game went on. It wasn’t something that we considered too much, but we picked up on it during the match. We found success out there.

“Sometimes, the final product in terms of crosses or decisions was missing, and if we found that I think we would have scored a lot more than three.”