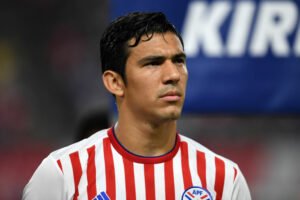 Hammer Fabian Balbuena has returned to West Ham empty-handed after being an unused substitute for both International friendlies for Paraguay over the International break.

Balbuena was forced to sit out on the bench last Sunday in Serbia as Paraguay in a 1-1 draw, three days later he was left out again and forced to watch a 1-0 loss from the bench in Slovakia.

Balbuena is unlikely to fare much better back in England with Manuel Pellegrini favouring his centre back partnership of Issa Diop and Angelo Ogbonna.

Arthur Masuaku earned his fifth senior DR Congo cap in their 3-1 friendly defeat to Ivory Coast last Sunday after playing the full ninety minutes previous Thursday for his country in a 1-1 draw against Algeria.

The left-back played the 90 minutes in Amiens, France, as Ivory Coast proved too strong with a couple of Premier League stars scoring the decisive goals.

Despite these two international appearances, Masuaku is also likely to be named on the bench for Pellegrini’s visit to Everton on Saturday lunchtime.