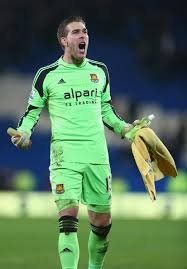 Goalkeeper Adrian emerged as the Hammers hero – crashing home the final spot kick of a penalty shoot-out to see the team through to the fourth round at the end of an absolute epic!

The 20 penalty shoot out saw the Irons emerge as 9-8 winners at the end of one of the most awesome FA Cup ties ever seen at the Boleyn.

Enner Valencia had given us the lead after 50 minutes when – played in by Andy Carroll – he slid his first Upton Park goal past Robles from close in.

And it looked plain sailing for the Irons when Aiden McGeady was sent off on the 56th minute for a second bookable offence, hauling down Mark Noble.

But nothing could have been further from the truth when inspired Everton sub Kevin Miralles produced a quite magnificent free kick to curl a shot past Adrian.

The Hammers though were denied a clear penalty when Stones was adjudged to have handles ourside the box when TV replays showed his arm was well inside.

The Toffees though really stepped their game up and took the game into extra time when after missing a sitter, Lukaku gave his team the lead when squeezing home after brilliant work by Miralles in teh seventh minute of the extended period.

The visitors were pressing and pushing and it wasn’t until  Sam Allardyce sent on Carlton Cole that the breakthrough came when he prodded home from a Tomkins knock down.

Then came the amazing penalty shoot out and after we had managed to score our first four with Naismith missing, Stewart Downing missed the fifth.

It remained all square until Everton keeper Robles hit the underside of the bar and saw th ball bounce out and Adrian scored with the last kick off the match that we knew we would travel to Bristol City for the next round.

In the first half Cresswell almost opened up the visitors defence in the sixth minute when he whipped in a great ball but Carroll was just foiled by a fortunate Stones intervention as Carroll closed in.

But the Everton central defender almost gave the hammers the lead when losing possession six minutes later to allow Valencia a chance to dance into the heart of defence but his clipped effort caught keeper Robles’s arm and rebounded to Carroll whose header hit the uptight.

It was very much end to end stuff and Collins was in brilliant form to intercept as Noble  was caught on the ball around the penalty area.

As play flew to the other end Downing saw a low shot fly just wide before Song tried his luck from close in only to see the ball rebound off Valencia.

It was an astounding game of football and will live long in the memory of all those inside the ground on an extraordinary night.

← DG wants Final “while young enough to enoy it!”
Sam: “That game had absolutely everything” →
Click Here for Comments >