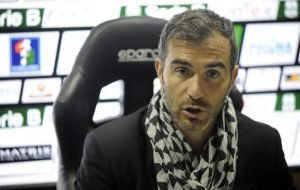 Enzo Maresca will leave Sevilla this summer to join West Ham on three-year deal reports in Italy claim. Maresca, who has been alongside Vincenzo Montella at Sevilla this season has some experience of the Premier League having played for West Bromwich Albion during his playing career.

The former Italian midfielder has spent time with Pellegrini before, having played under him at La Liga side Malaga. Maresca, who enjoyed a successful playing career – won five major trophies with Sevilla, including two UEFA Cup honours.

He spent one season in Greece, before returning to Spain with Malaga and then ended with spells at Sampdoria, Palermo and Hellas Verona in the Serie A. His former boss Montella was sacked by Sevilla at end of the season.

Pellegrini’s trusty assistant Ruben Cousillas is also expected to join him as could his favored fitness coach Jose Cabello and goalkeeping coach Xabier Mancisidor who he appointed at Manchester City. Malaga sporting director Mario Husillos could be named as the replacement Head of Recruitment by Pellegrini.