West Ham manager David Moyes has made a bizarre claim about winger Said Benrahma’s contribution to the team. Speaking to the press ahead of the Hammers relegation crunch match against Everton, Moyes said of Benrahma. “He’s probably been the best of our attacking players but we’ve not had many at this time. Creating and making and scoring chances has been a problem for us. That’s why we bought in Danny Ings.”

Whilst I totally concur with his appraisal of the Algerian attacker, it does make it even more confusing why David Moyes has been dropping him for crucial games. West Ham have been faltering in attack this season and I’m certainly of the opinion that Benrahma has looked our biggest threat. 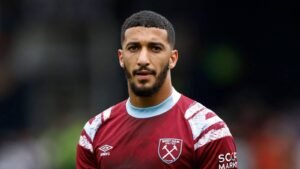 But to hear the manager confess that he also shares that opinion is somewhat odd. Pablo Fornals is a willing runner and fully committed to the team. However he’s not on the same level as Benrahma as an attacking wide player, yet Moyes seems to persist with him in that position.

Let’s hope the West Ham manager decides to play his best attacking players to support Danny Ings against Everton. The last thing we need is to see the new signing from Aston Villa isolated up front on his debut.

← Moyes goes “off piste” – err, an explanation!
Moyes explains his “sacking not end of earth” comment →
Click Here for Comments >