Posted by Sean Whetstone on May 5, 2020 in Videos, Whispers 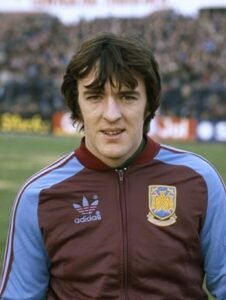 Pat Holland put West Ham into the lead in the 28th minute. Just before half-time, Frank Lampard misjudged a back pass, allowing Peter Ressel to collect the ball and pass it to Rob Rensenbrink to score the equaliser. In attempting the backpass, Lampard tore a stomach muscle that ruled him out of much of the remainder of the game. Three minutes into the second-half, François van der Elst scored, assisted by Rensenbrink. Keith Robson later equalised for West Ham from a cross by Trevor Brooking. Anderlecht were awarded a clear penalty in the 73rd minute, after Holland rashly challenged and fouled Rensenbrink who then scored from the penalty. Holland obviously misjudged the tackle and was duly penalised. With two minutes left, as West Ham fell apart, van der Elst ran through to score Anderlecht’s fourth goal for a deserved victory.

In a twist of fate, Van Der Elset who scored against the Hammers twice in the final would sign for West Ham for £400,00 five years later scoring 17 times from 70 appearances wearing a Claret and Blue shirt .