Pellegrini shows his humorous side

Posted by Sean Whetstone on December 3, 2019 in News, Whispers 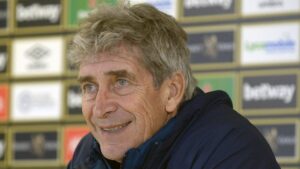 The West Ham manager showed he does indeed have a humorous side when he meet with reporters at his pre-match conference at Rush Green earlier today.

Speaking to Sky Sports News reporters he joked “What is my position in the rankings to be sacked? First, still? Me? No more? It was only for one game? I like to be number one.”

When one member of media told the Hammers manager he appeared to like to stay calm and not get too emotional. the 66-year-old manager smiled and said  “In front of the media at least…”,

With a reputation for being one of the most dour managers around when dealing with the media this new approach came as a big surprise to most.

It may not have been the most exciting asides in the world but it was good to see him demonstrating  that he was capable of enjoying a bit of fun in his press conference. It certainly seems the pressure has temporarily lifted from the Chilean gaffer and long may it continue.

Let’s hope his dry sense of humour continues tomorrow night after a win over Wolves.

4 comments on “Pellegrini shows his humorous side”