Posted by Sean Whetstone on April 29, 2020 in News, Whispers 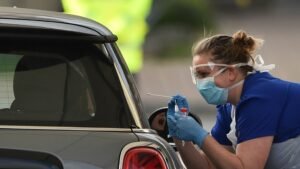 The domestic football season in England should only resume once all players have been tested for coronavirus, says the chief executive of the League Managers’ Association (LMA).

The government has a target to reach 100,000 tests per day by Thursday but as of Monday, the daily testing capacity had reached 43,000.

The EFL have predicted that 100,000 tests would be required to complete their league safety with players, coaches and support staff all undergoing regular tests.

The Premier League would need tens of thousands of tests to complete the season but there would be public uproar if they relied on government capacity.

The top-flight would need to turn to the private sector to regular test those plating and supporting football games and that should be funded by the Premier League themselves.

Many private companies are already supporting the Government initiative to support expanded testing so the question is whether the Premier League will be able to procure and administer the amount tests required.