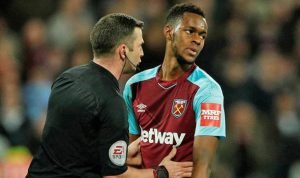 It was Oliver’s first match in charge since handing Real Madrid the crucial Champions League penalty against Juventus and sending off Gianluigi Buffon. Buffon hit out at Olivier repeatedly following the incident and the official’s wife, Lucy, a Women’s Super League referee, who has received abuse and threats. It was the 79th minute before Oliver reached for his first yellow card and that was for the excessive celebration of a Stoke goal by Peter Crouch with Oliver shaking the striker’s hand first before issuing a caution.

Unsurprisingly Stoke’s game plan was to knock seven bells out of West Ham and the more they went unpunished the more it encouraged them to press with their physical game. It was the 82nd minute before Bruno Martins Indi received a yellow card for a foul.

West Ham had three goals disallowed, two for offside and one for handball. The offside disallowed goals seemed fair decisions. Arnautovic was just offside when he headed in Cresswell’s shot while he was deemed to have interfered with play with Fernandez disallowed goal.

Carroll argued that he had not committed handball before teeing up Hernandez for a potential winner and replays showed that Carroll was fouled and it was ball to hand.