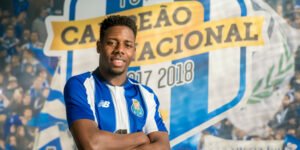 Porto full-back Wilson Manafá is being eyed by West Ham according to Portuguese newspaper O Jogo who says the Hammers have sent scouts to observe him.

The 26-year-old main position is as a right-back but he can also play at left-back or a right-sided winger.

Born in Oliveira do Bairro Manafá finished his development at Sporting CP.  He made his senior debut with their reserves in 2013 but was later sold in 2015 for £135,000.

In the following years, Manafá alternated between the second and third divisions in Portugal, representing S.C. Beira-Mar, Anadia F.C. and Varzim SC.

In 2016, Manafá joined Portimonense S.C. on a three-year contract for a transfer fee of £45,000. In his first season, he netted three times in 38 matches to help the Algarve team return to the Primeira Liga after a six-year absence.

He has a contract until June 2023 with FC Porto but he could be available for a transfer fee as low as £3m.

With a current weekly wage of just £3,000 per week, he would not break the bank when it comes to personal terms.

← Psycho on Hammer: You ain’t seen nothing yet
The summer window – it’s not simple or Eze..y →
Click Here for Comments >