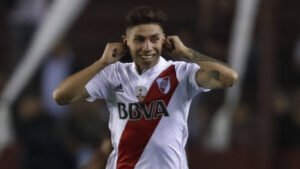 West Ham are being linked with yet another right back – this time from as far away as River Plate.

The fact that the player was being linked with the Irons when he was apparently fancied by Manuel Pellegrini rather than David Moyes seems neither here or there to those writing this stuff.

Nor does the fact that apparently Manu Lanzini – not exactly  flavour of the season at the London Stadium – has recommended Gonzalo Montiel as the man for the Hammers’ Premier League ambitions.

It’s not one we  think to take too seriously given a price of €10 million is being mentioned for the guy at the same time as Tomas Soucek’s former team mate at Slavia Prague Vladimir Coufal is being tipped for the position at a price of between £2million to £3 million.

That looks a more realistic piece of speculation than this which has been around for some time for a player who amazingly is fancied by two entirely different types of manager in Moyes and Pellegrini.

Three reports claim that the Hammers have already lodged a bid for a player who only has 50/50 chances of getting a work permit.

Meanwhile a reliable Hammers insider well known to CandH declared: We have made no bids yet anywhere and the only action has been in the direction of Albian Ajeti by Celtic.”