Report: West Ham back in for Barcelona striker 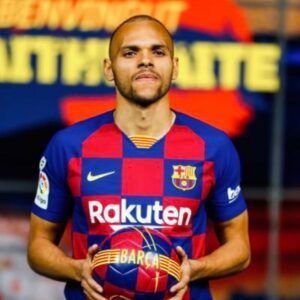 West Ham are back in for Barcelona striker Martin Braithwate according to a report in Spain.

Spanish news outlet Sport says both the Hammers and Everton hold interest in the Danish striker this summer with a valuation of 18 million Euros. Barcelona have been affected by the pandemic with the club struggling to pay their wage bill and the squad forced to take a 50 per cent pay cut.

It is claimed that the Catalan club are looking to sell ex-Middlesbrough forward Braithwaite just a month after he joined in a  £15million deal from Leganes. Despite signing a deal with Barcelona until 2024, his time at the club could already be over after just three LaLiga games played.

Serie A clubs Torino and Sassuolo are two other clubs that are believed to be interested in Braithwaite.

Braithwaite scored just nine goals for Middlesborough in 40 Championship games in an underwhelming spell on Teesside between 2017 and 2019.

While at Toulouse prior to his Boro move he netted 40 goals in 149 games.

The 5ft 10in striker bagged five goals in 21 appearances for Leganes after initially joining on loan from Boro in January last season.

After joining Leganes permanently he scored another eight goals in 27 games in all competitions before his move to Barcelona.