Posted by Sean Whetstone on February 22, 2020 in News, Whispers 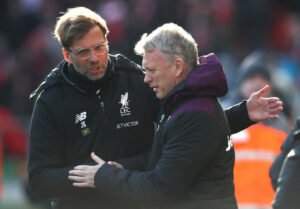 Losses for Bournemouth, Newcastle United and Aston Villa went West Ham’s way this afternoon, as well as the one all draw for Brighton this afternoon. The Hammers will be hoping that Manchester United do them a favor by beating Watford tomorrow and will be cheering on Wolves to beat Norwich on Sunday.

Although West Ham remains 18th on 24 points in the relegation zone a score draw against Liverpool would be enough to take the Hammers out the relegation zone above Aston Villa on goal difference while an unlikely win over the Premier League leaders would push them up to a lofty 16th place.

While no-one is expecting West Ham to beat Liverpool on Monday night nothing is fully predictable in the Premier League.

Liverpool have opened up a 22-point lead at the top of the Premier League this season, having won 25 of their opening 26 fixtures.

If they beat West Ham at Anfield on Monday, Liverpool will equal Manchester City’s record of 18 successive top-flight wins, while extending their unbeaten record to 44 matches.

← Mayor of London calls on clubs to follow West Ham’s lead
What happened to FFP? →
Click Here for Comments >