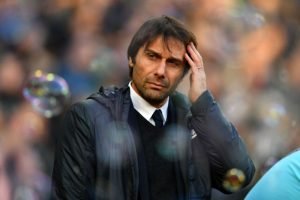 Conte’s babyish outburst may have paid off

West Ham stayed very much in the top six mix despite a Saturday of good and bad news for the club in other games.

The bad news of course was a 4-0 win at Leeds by the Spuds which saw them draw level with us on points but with a game in hand.

Manager Antonio Conte’s somewhat babyish outburst about if he was the problem he’d leave  after the Burnley defeat presumably had an effect.

It may have been a tad infantile in itself but sadly it’s impossible to argue with a 4-0 win away from home at any time.

However, it left them eight goals inferior to us on the goal difference issue which may be decisive by the end of the season.

Better news came out of Old Trafford where relegation threatened Watford managed a 0-0 draw which left Manchester United five points in from of the Irons ahead of tomorrow’s game at the London Stadium.

That now takes on a truly important emphasis with Wolves two points behind us with a game in hand.