Slaven: “In reality a contract is for next few months” 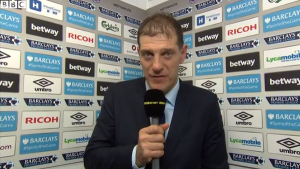 Slaven Bilic has covered a multitude of topics in an excellenyt article with the Daily Mail’s Martin Samuel today who is  a Hammer by the way!.

And one of his central points is that every Premier League club must have a hard core group of British players such is at the case at West Ham.

He explained:  You need that core, that group of English players, that is where the spirit of the team comes from — but it is hard because they are so expensive. We tried to get Andrew Robertson from Hull, who is Scottish. I like him, he is good, he is young, and can improve.

‘We thought we made a high bid, £7million, but Hull wanted £15m. What can you do with that? I speak to friends in Germany, they look at the transfer fees at English clubs, Championship clubs, and players are costing £12m. So when an English club calls, what do you think they say?”

Recalling his own playing days at Upton Park he said: “But it is the heart of the club. When I came to West Ham, we had great players, Florin Raducioiu, Ilie Dumitrescu. But they weren’t West Ham. West Ham was Steve Potts, Julian Dicks, Ian Bishop. Those were the guys you looked to in the dressing room. You’ve got to have it.

‘We have that: Mark Noble, Andy Carroll, Aaron Cresswell, James Collins. I am not saying you have to be the loudest man, but it’s good for a manager when you know you have a group who will drive the rest.’

Turning to his own position a manager of the club he declared:  ‘It’s fine to have a contract, but in reality your contract is the next few months, so you might as well enjoy it.

“There is no point being afraid, not doing the things you wanted to do, putting a blanket over your head, oh my God, oh my God. The pressure is there anyway, and it is everywhere. Championship, League One, no different. So I decide to enjoy it.”

It’s a top article – read it at http://www.dailymail.co.uk/sport/football/article-3735264/West-Ham-boss-Slaven-Bilic-Premier-League-football-like-Hollywood-movie-s-best-place-work-play.html