Posted by Sean Whetstone on November 24, 2014 in Whispers 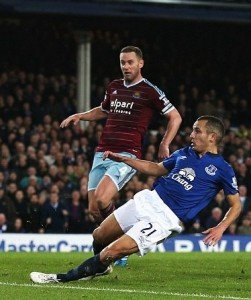 Kevin Nolan’s performance on Saturday at Goodison Park has received a lot of criticism with many fans  asking whether he is still up to the job.

With five injuries at the weekend Sam Allardyce was forced to start with his 32 year old enforcer but he looked off the pace and lacking quality in his first full match back since being displaced.

Many supporters have called the early recall of Diego Poyet from Huddersfield to give another option in midfield after Stewart Downing, Alex Song and Cheik Kouyate picked up injuries.

Whether Nolan is just lacking match fitness, confidence or is just past it is the question on everyone’s mind.

It is claimed he has lost over a stone in weight to improve his fitness this season but on Saturday Osman sailed past him with ease to score the winner.

There is no doubt he is a great leader both on and off the pitch but should he command his £200,000 per month wages he currently costs West Ham.

Nolan is contracted until 16th 2016 on his lucrative five year contract,  We need to see more contribution and chicken dances soon for him to pay his way.