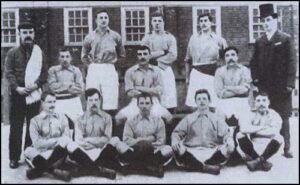 For the purists like Hammers historian Nigel Kahn, this summer marks the 120th Anniversary of West Ham United after they were formed on 5th July 1900 on Barking Road following the disbandment of Thames Iron Works team.

This VHS video from the nineties now converted to YouTube this week by Rob Banks covers the first one hundred years up of West Ham United to 1995 and is narrated by celebrity West Ham supporter David Essex.

A two-hour retro production to pass the time with no Premier League football with some great interviews, clip and classic footage.

← Hammers threatened at relegation talks
How dare the PL put players lives at any sort of risk? →
Click Here for Comments >