Posted by Sean Whetstone on October 7, 2018 in News, Whispers 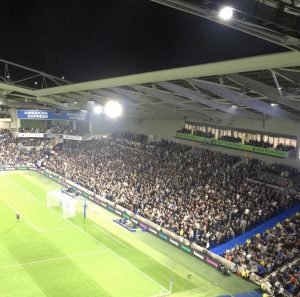 West Ham away supporters have been criticised by the Metropolitan Police for singing songs at the Amex stadium deemed to be offensive.

The Met Police’s dedicated West Ham twitter feed initially posted a message saying “Great support on a frustrating night down at Brighton, No West ham arrests however the chap who threw a marital aid onto the pitch can expect a call. Also unfortunately a few inappropriate chants.”

West Ham Police Liaison officer, Andy Sheldon later updated the message the following day by adding: “In relation to last night’s Tweet I should have worded it better, There in no room for Homophobic songs or chants in any walk of life let alone at a football match. It’s not Banter its not O.K because its football. Discrimination of any kind is not acceptable. If you witness any of this behaviour you should notify a steward or police officer, If you do not wish to talk to police. You can still report it by contacting @kickitout With any supporting evidence”