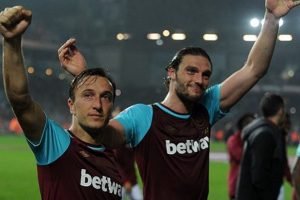 West Ham are now virtually certain that Andy Carroll will return to the match for the game against Spurs.

He is available right now to take his place on the bench for the first time since the summer recurrence of the ankle injury injury which has plagued him for a couple of years or more.

A senior source from inside the club told us: “Everything is going well with Andy and we expect him to be available for the game if selected. He has been training well and there have been no further setbacks.”

Carroll needs to stay fit now as he looks to show himself off ahead of the end of his contract in order to find either a new club or be offered a year’s extension at West Ham.

That hasn’t been entirely ruled out despite his awful injury record although should it happen – and there is definitely no certainty about it – he would be likely to receive an offer of around £50k a week – a big cut on his current £87k.”