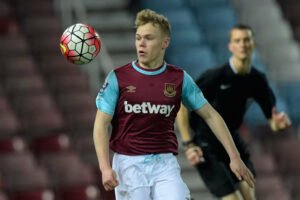 The Republic of Ireland Under-21 international will link up with his international team-mates Conor Coventry and Zack Elbouzedi at Sincil Bank. The 20-year-old  has never made a senior first-team appearance for the Hammers.

All his outings in a West Ham shirt have been for the academy side in the EFL Trophy, once in the 2018-9 campaign – and then twice more this season.

He netted twice in the 5-4 win over Newport County in September – and has also bagged 13 goals this season for West Ham’s under-23s.

He said: “I was at West Ham and I’ve been playing the last six months with their under 23’s and I was looking to go out on loan but when the option was there to come here on a permanent deal, I got it sorted straight away.I’ve been talking to Conor over the last week or so about the club and the lads and he’s had nothing but good things to say so I can’t wait to get started.”

“I’ve been away with Ireland meeting different players, so I know coming here it’ll be a little nerve-wracking meeting the new lads and getting into the new environment. But once you’re in there, after a week or so it’s pretty much about training and playing, you settle in and it’s all fine.”