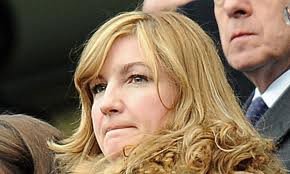 Karren Brady has confirmed – a little late though – that Andy Carroll is staying at West Ham.

ClaretandHugh was the only media source to explain that last week before the story was finally denied by its originators – the Newcastle Chronicle.

But today – in her national newspaper column – the vice chairman makes it clear Mr Carroll is going nowhere although it would have been a better ready seven days ago!

She says: “I can tell you I don’t do knockdown prices and anyway, what gives anyone the idea we wish to sell him or that he wants to leave?

“Sam Allardyce wants to keep him. He wants to stay. Just because the team is playing well without him in no way means he is surplus, rather that when he comes back from injury next month he will be a powerful option for the manager and England. His strength and bravery have galvanised us in the past.”

Thanks for that Karren, better late than never!