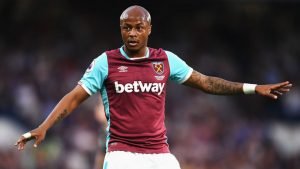 Reports that Andre Ayew has become a malaria victim were dismissed this morning.

Ghana and former Hammers boss Avram Grant  confirmed during yesterday (Fri)  that the West Ham  star has contracted illness and must win the fitness battle for the second Group match.

Ayew did not train fully with the squad on Thursday which prompted questions about his fitness for Saturday’s match.

Speculation then arose that the record Hammers signing had contracted malaria but that was dismissed by a Hammers source to CandH this morning.

We were told: “He had a tummy bug and felt unwell but our understanding is that he is fine this morning (Sat).”