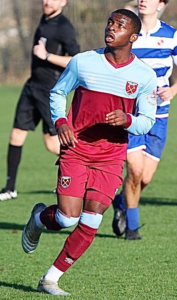 The 16-year-old, who operates as a winger or behind the striker, has impressed many scouts during games this season.

The England Under 16 international joined the Hammers from Queens Park Rangers and he is already on the radar of most he Premier League’s elite.

Baker-Boaitey made his debut for the club’s Under-18 team a little over a week after turning 15 last season and staff at Chadwell Heath rate youngster very highly.

A tricky wide man, he is able to play off either foot and has shone when scoring goals after cutting in from either flank.

Let’s hope we can keep hold of the 16-year-old  and he becomes the next Declan Rice or Jeremy Ngakia by making his first-team debut in the next few years.